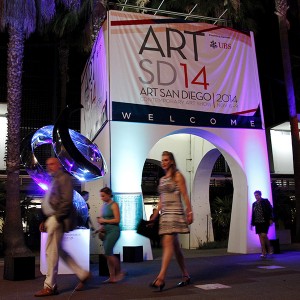 The 2014 Edition of ASD welcomed over 15,000 visitors and showcased over 80 exhibitors from across the globe. Over the course of the four-day event, the show also featured numerous special events, talks and performances.

Founder and Director Ann Berchtold produced the first San Diego Art Fair in 2009, formerly “Beyond the Border”, at the Grand Del Mar. Ever since, Anaimation has been developing the Visual Identity for the show, all graphic design applications from website to catalog and signage. The 6th Edition of the Fair may be the last Identity created by Anaimation since Redwood Media Group has its own set of experienced creatives.

It has been a learning experience to be able to collaborate with the San Diego Art community for all these years since working with Art Connoisseurs is an Art in itself.