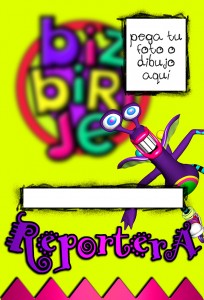 18 years ago, on a Monday like today (November 25), the edutainment TV show for children “Bizbirije” premiered on Canal Once TV, a Mexican cultural channel owned by the National Polytechnic Institute. “Bizbirije” had a magazine-style format similar to a news broadcast, but with the difference that the notes were made ​​by children viewers who became “Reporters”. The show was on air for nearly 14 years uninterrupted.

In words of Patricia Arriaga, Founder/Director of the Children Programming: “We never imagined the huge impact the program would have among children. We printed 300 reporter credentials to meet the demand until the end of the year but that Monday only we had 2,200 applications. On Tuesday, 2,400 and 3,500 by Friday. The children blocked the calls Central Ticket Master for the first time in its history.”