The Art of Tijuana Innovadora: Cardinal 5

The Art of Tijuana Innovadora in the Public Space: Citizen Participation, Visual and Electronic Gestures

Taking the proposal promoted by the Tijuana Innovadora 2012 movement — to foster awareness of the value of the city of Tijuana and its contributions to the world, as well as a sense of belonging and pride that motivates its citizens to achieve their goals—a group of artists and cultural agents formed by Ángeles Moreno, Catalina Silva, Eric Morales, Gabriela Posada, Illya Haro, Iván Abreu, Jhosell Rosell, Luis Garzón, and Olga Margarita Dávila, have come together to develop the project CARDINAL 5.

“Lienzo Conectivo” (public participation)[/caption]This public space intervention unfolds in three segments: LIENZO CONECTIVO (public participation), TEXTIL CARDINAL (object work) and TIEMPO DE ESPERA (interaction with data in real time via the Internet). CARDINAL 5 is conceived around five working concepts promoted by Tijuana Innovadora: Industry, Humanism, Creativity, Rootedness, and Identity. Each one of these concepts relates to a point of entry/exit into or from the city: Puente Mexico (Border Cross), the Airport, Casetas de Rosarito (Rosarito´s Toll Road), Central Camionera (Bus Station), and Faro de Playas (Playas Lighthouse). The latter is an element for orientation and serves as the emblem for CARDINAL 5.

In the case of LIENZO CONECTIVO, citizens gave meaning to each one of the following statements: “I would like for Tijuana to have…”; “What I like best about Tijuana is…”; “I am a Tijuanense from…”; “Tijuana is…”; and “I work in…”, expressing their opinion writing it in 10,000 stickers they received in the city’s access/exit points. TEXTIL CARDINAL, using 32 iron tabulating modules with colors symbolizing the juncture lines between other entry/exit points that, like a textile piece, refer to the social tapestry of all of those who make Tijuana a living entity. TIEMPO DE ESPERA, in turn, is an algorithm composition that uses real-time data from the US Department of Homeland Security’s RSS feed (news channel) to generate a sound and visual interpretation, producing a musical score for 24 instruments sequenced according to the number of people and the agility and will of the agents as they allow transit through the San Ysidro Border Cross. 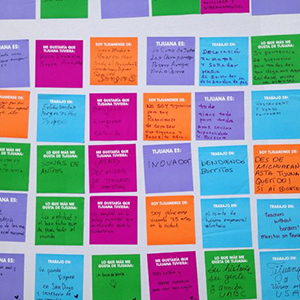 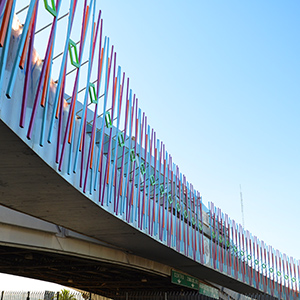 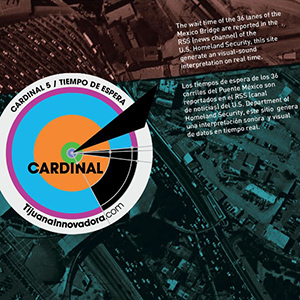