Featuring more than 100 artists and representing five decades of collecting, this expansive group show of Museum acquisitions highlights many of the region’s most beloved and accomplished artists.

Works presented in the exhibition range from Russell Baldwin’s A Study (1959)—the exhibition’s earliest work, which entered the collection the year it was made—to Glenna Jennings’s photograph She forgot what was important and fastened on the little things (2008), which was purchased after it appeared in 2010’s Here Not There: San Diego Art Now. Taken together, works such as these bookend fifty years of collection building, demonstrating the Museum’s ongoing commitment to artists living and working in San Diego and Tijuana, as well as those hailing from the region. 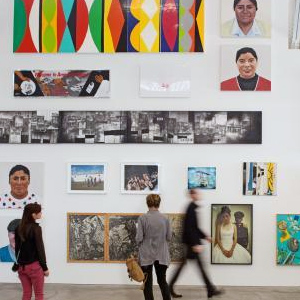 Presented in the capacious Farrell Gallery of the Jacobs Building, many of the two-dimensional works will be displayed in a dense, salon-style hanging covering the walls. A separate white cube space designed for the exhibition occupies the center of the room, presenting focused selections of works inside the cube, which will change seasonally.

The exhibition will be on view through June 1, 2014 and thematic installations will rotate inside the cube every three to four months. The inaugural installment of this ‘show within a show’ features a range of sculptural practices, placing emphasis on materiality and the use of found objects. Subsequent rotations will address border activism in art, juxtapose two or more artists in unexpected combinations, and spotlight hybrid works of video and sculpture, among other thematic installations.

The Very Large Array aims to rethink the parameters of a permanent collection show, making an unusually large portion of the collection visible and accessible. The exhibition’s title references the famous group of immense astronomical radio telescopes in the New Mexico desert—a nod to the vast array of works assembled in the Museum’s collection and to the ability of artists to connect us to something much larger than ourselves.

The Very Large Array: San Diego/Tijuana Artists in the MCA Collection is organized by the Museum of Contemporary Art San Diego. Institutional support for MCASD is provided, in part, by the City of San Diego Commission for Arts and Culture.

More about the Exhibition →